A Year of Projects Update - week 22

It's been another busy week here, and that's without thanksgiving.  Of course it's only going to increase in the next few weeks, hopefully only in good ways.
FO's
I finished the Christmas jumper this week!!  I did the finishing touches (noses and collars) and now he's ready to wear it. 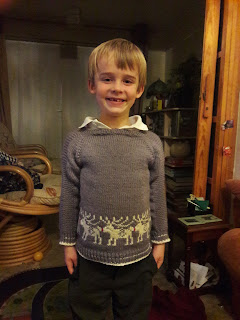 WIP's
My socks have not progressed much since last week as I was finishing the jumper and progressing on another new project.
Thomas wanted some mittens - so I used some John Arbon that I had in stash.  This is, I think, the nicest yarn that I have ever knit with.  It is John Arbon Knit by numbers and is splendid.  I am making up the pattern as I go. 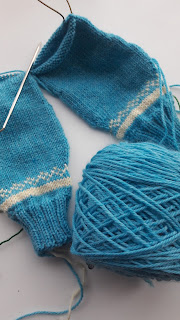 I have also wound up the yarn for some more socks - however, Daniel has decided he wants some first, so we will see if we can get 4 pairs out of it.  It is candy cane by Mothy and The Squid. 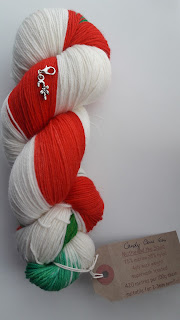 Stash Enhancement
Last week I said I was expecting some bits and pieces.  One was the candy cane already wound.  I also took ownership of some yarn that I wanted for a special project.  I wanted to join Dani of Little Bobbins podcast with her Christmas eve cast on of socks.  She did a special kt in collaboration with Helen Stewart of Curious Handmade, who wrote a pattern called vintage fairy lights and she made a bag and there was some yarn from an indie dyer.  I new that I would miss out on it as there were only 20 kits made so I made my own.
The material for the project bag came from Plush addict and is fully lined.  The yarn and stitch markers came from Mothy and the Squid in the frosted holly colourway - it has stellina so is all sparkly.  I also purchased the pattern so I am all set!! 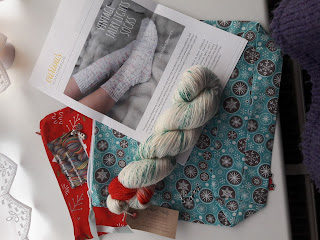 Now I just need to finish a few projects for presents and to free up the needles for the new year.  To see how the others are doing click the link.