We have our half term break this week, it seems like it's been such a long time coming.  I have made some progress this week, but hopefully, I should be able to fit in a fair bit of knitting this week - which is good news.

WIP's
My From Way Back is progressing nicely but slowly.  As I said last week it's a great knit but I do have to concentrate on the lacey bit. 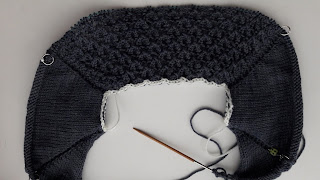 I have nearly finished my Hermiones Valentine socks (they weren't ready for Valentines as predicted) - I hope to get these done by the end of today. 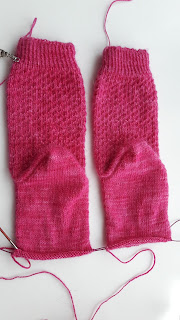 These are for the Grocery Girls sock bash KAL and Inside Number 23 Harry Potter KAL (as well as Boxosox) and both of these are month long KAL's.  But we needn't worry that I can't have a pair of socks on the needles as I have signed up to a test knit!  I can't show you these as they are a test knit and I haven't cast them on yet.

As if that wasn't enough I have also started a second test knit.  I talked last week about starting a shawl with the yarn I won - I was going to knit Fodhla by Kniterarium.  However, Ruth of Knitterarium is running a test knit for her latest shawl that I thought would be perfect for the yarn so I have decided to do that instead.  I am hoping that knitting it for my friend and it being a test knit will spur me into finishing doubly quickly. 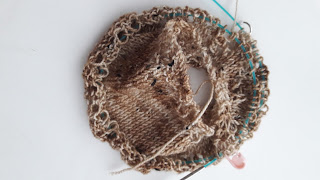 Well I fully intend for this to be a crafty week, I may even get to some sewing.  Hope everyone has a good and productive week.