And we come to the end of our half term break.  I'm always sad as I love spending time with the boys   but it's only six weeks until the next one!  So this week didn't go quite to plan  - the weather wasn't great, which doesn't usually put us off,  but this time we were all under the weather and just felt like doing nothing!  I did do a fair bit of crafting and I did do a lot of tidying and spring cleaning.
I have made progress on both sweater projects that I have on the needles right now, but both are fingering weight so they are quite slow growing.  Still enjoying both though!
Like a cloud  is coming along nicely.  I have joined for the body and now it is just back and forth until it reaches a good length. 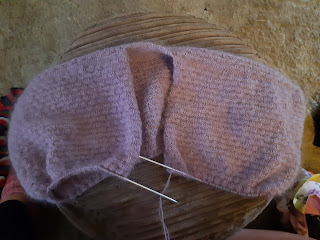 Stonecrop is also coming along  I have a couple more pattern repeats before I  split for the sleeves and then, given that it is cropped, shouldn't be much more after that! 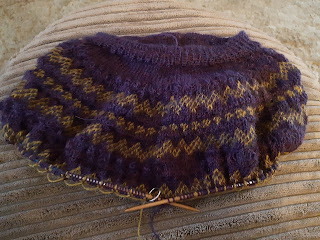 As Thomas was unwell  we didn't make it to unravel.   I was quite disappointed, but I don't really need yarn right now and I have promised myself a class next year instead.
I also didn't get to my sewing as I picked up the wrong cotton.  Maybe next weekend!
Anyway, I hope everyone has a good week.
Posted by Lucy Bowen at 12:14