So I finished the test knit and cast on new projects.  I have made a little progress on Rhombing around, but not enough to show.  I cast on some socks - Jesse by Rachel Coopey, my first colourwork socks.  I am using a bit more of the yarn from my frogged cardigan, so it is going to good use. 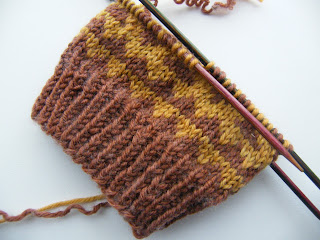 I also decided to cast on a project that has been on my year of projects list for a good couple of years. I found a tutorial on creative bug for double knitting and found a straightforward pattern for a double knit cowl and got going!  Now the cast on was a bit difficult, there were a few choice words and I had to watch the tutorial closely several times before I got it!  But that was the hardest part and now it's really easy (famous last words).  I can honestly say double knitting is magic - it's just appearing and is quite good fun!  Ok, so my cast on was still a bit dodgy in places and I've doctored the pattern as I'm not totally sure how to incorporate a third colour, but I'm over the moon at how it's turning out. 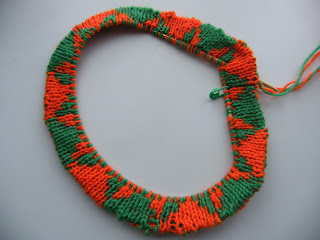 I also cut the fabric for my third sailor top and I hope to start on a few tree decs by the end of the week.
Now I'm back at school, my reading has stalled, so I've renewed the Seas for a third time, but not sure when I will get to it - we'll see.
Linking with Nicole and Ginny
Posted by Lucy Bowen at 17:02