I mentioned in my Year of Projects Posts, that I was trying my hand at soap making and several readers expressed that I share my experiences.  So here we are!
Firstly, I just have to say, these are my own very limited observations and thoughts, and are not intended to be comprehensive or provide a tutorial or such like.
I have now tried two methods of soap making, melt and pour and a natural soap (a more traditional soap).
Lets start with the natural soap. (I am using a kit - the Natural Soap Making Kit by Kirstie Allsopp as seen here.)
Now firstly I have to say that it is not finished yet.  I went against all my knitting training and did not read through the pattern to the end first!  If I had I would have found that when my soap is at the stage it is at, at the moment, it is still corrosive and needs 3/4 weeks to 'age'!!  (I will come back to this later). 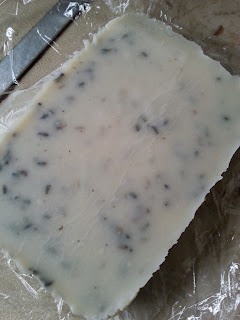 So it started well, I had a kit so everything was measured out, but I didn't want to make it all , so decided to half everything.  This process was easy and then had to put in a microwave till it got to 60 degrees.  I don't have a thermometer so just went to when it was all melted together, which seemed fine.  I was a little apprehensive about the caustic soda given all the warnings, even though I use it at school.  But that too was fine, I used the gloves as instructed and opened a window but I didn't notice any fumes.  Then I got to mix together, which all went swimmingly.  I was supposed to mix for 10 minutes, break for 5 then repeat until it had started to set.  Well it thickened but didn't get to the trace point Kirstie Allsopp wanted.  So I read the instructions and they said to heat it back up to kick start the reaction - it didn't say how hot or indeed if you had to get it to trace (leave a trail), so I didn't (being a little fed up of stirring at this point).  I went ahead and added my lemongrass and lavender and poured it into moulds. 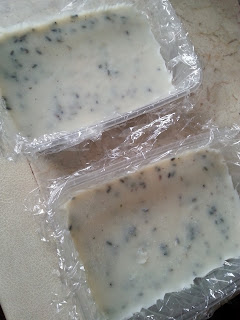 It took a day but did set ok, and now I have to wait till it ages.
Now the Scientist in me is a little agitated at the lack of a definitive timescale, so I will get some pH paper from school to test it before I use it.  Here it is - curing.  A little rustic looking, but, I guess, that is the point. 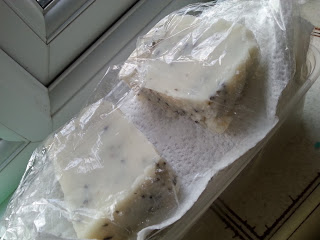 It looks as though it will be nice and lathery (if that is a word!), but is it worth the faff? Probably not - I don't think I have enough patience to get any more of this, but I do have the remaining half kit, which if it sets ok and is not still corrosive (!) I will use with some colouring and different fragrance later in the year.
The melt and pour base.
Now this was a whole different kettle of fish.  This was so easy - you just cut up how much you want, melt it in the microwave, add colouring and pour into moulds.  I will make some adjustments to my original batch however.  I used too much and therefore by the time it was all melting it had formed bubbles which resulted in a white bloom to the finished soap.  You can just about make it out on this photo - the top soap was the one with bubbles, the bottom soap made later without. 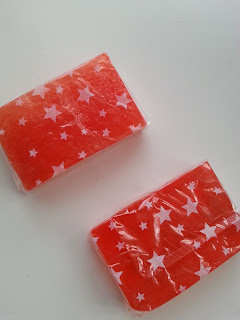 I so next time I will use less soap and more fragrance.  Then the only issue with this one is it doesn't produce a lot of lather, enough but not lots.
In summary, I want this soap for myself and gifts.  In truth I think that means it will be the melt and pour base that I get more of for ease and reliability.  I will however, use up the kit and will be a little more adventurous if the soaps I have here lather well.
So there you have it - my assessment of soap making!
Posted by Lucy Bowen at 13:35