I can't believe we are at the end of the half term break already!  Thomas was struck down with flu this week, bless him.  In the end he was 5 days on the sofa being sick - I did think we might have to take him to A and E with dehydration on Thursday but he rallied and is now as well as can be and demanding MacDonalds!!
The only good thing about this was that I was able to do quite a lot of knitting and crafty things.
I made great progress on Hitofude and got to the waist band yesterday.  I now only have the long rows of the skirt to finish. 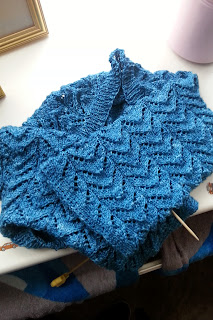 My progress will slow now but I hope to still get it finished by the end of the Self indulgent KAL hosted by the yarniacs podcast - 20th March.
I cast on and completed a sunhat for Daniel, who loves it. 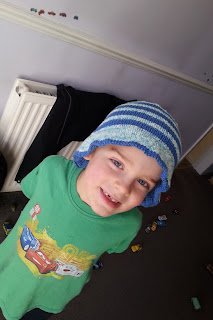 I made a little progress on my socks, but haven't given them much love this week. 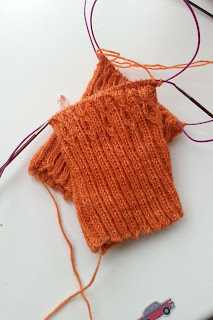 I also signed up for another KAL (its fine as I'm using stash yarn!) with Katya Frankel -the Anything Goes KAL where you can knit any of her designs.  I have chosen Bracken and CO last night. 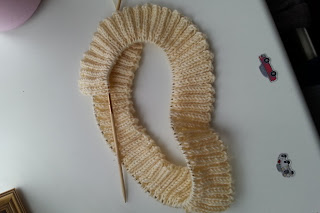 In addition to all of that I have been spending money on books.  I have been totally taken in by Interpretations 3 that has just been released by Joji Locatelli and Veera Valimaki so decided I needed the print version of the book.  It's in the post as we speak!  I will tell you how fab it is next week.  While I was there on the Pom Pom website, I'm afraid I was sucked in and took out a subscription to their magazine (Pom Pom quaterly) - Oh well.  I bought these because I have not bought yarn for so long.  However, I was reading Caffeine Girl blog and she mentioned a sock yarn from Arne and Carlos by Regia that I was hankering after a little while ago.  I needed some more wool wash and so checked that Loveknitting didn't have any - but they did - so I had to get some!!  Ho hum - must stop buying things!
To see what everyone else has been up to this week check out the link here - you can also check out our progress on Instagram using the hashtag #yop5