A Year of Projects Update - Week 28

We had a lovely relaxing week and now we are pretty much back to normal - most of the decorations are down and we are all back to school.
I have done some crafting this week and some planning.
In the Yarniacs group there has been some discussion about the make nine challenge.  Now the make nine is not for me as my year of projects list is testament to!  However, I do like a good list so I came up with this instead. 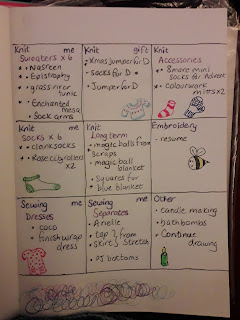 This is essentially my YOP list in grid form.  I also was inspired by something I saw on the East London Knits podcast.  She said that she had taken a photo of herself from head to toe in her underwear, printed the photo, drawn around it to produce an outline of her body so she could see the proportions of her body rather than a stylised one.  So I have done the same  I also took all of my measurements at the same time so that I have an image together with figures to refer to when planning the next project.  This is hopefully going to serve two purposes - one to see what garments might suit and two to hopefully reduce some of those measurements by the end of the year.
I did finish my headscarf this week - here is a bad photo of it in action. 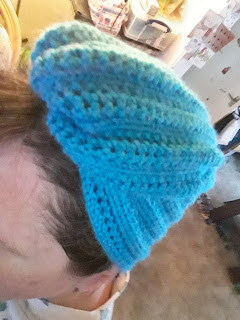 I have also made lots of progress on my projects.  I have worked on every one of them but will photograph next week.  I have also cast on one new project which is a jumper for Daniel in a huge ball of yarn that a friend bought me.
I also ct out all of the fabric for my next few sewing projects.  I now have fabric ready to sew for two more Coco dresses, a pair of PJ bottoms, a Mina skirt and an Agnes top.  I also found a dress that I have all but made that just needs the hem doing and the facing.  So now all I have to do is get the sewing machine out and get sewing!
And to be honest, that is it for this week.  I will endevour to document all of my WIP's next week as I am quite pleased with them all and there is a very real possibility I shall cast on another - now a pair of legwarmers is calling to me!
I hope everyone has a great week.
Posted by Lucy Bowen at 08:23