A Year of Projects Update - week 5

We have had a very pleasant week and will finish off with us at Snetterton race circuit camping for the weekend.  I am writing this in the week and will put this up when we return on Monday.
I have an FO this week!
The shortie socks are finished and have been well used already. 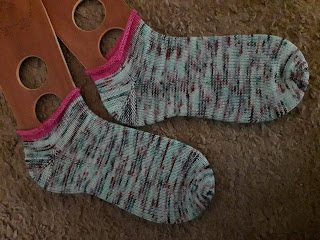 This is a toe up version of the Rose City Rollers with a German short row heel.  I used some leftover Christmas yarn from Amy at Stranded dyeworks, with a tiny bit of a random mini to make the leg a little longer.
I also cast on Epistrophy using some Coldwater Mill yarn that I bought a few years ago.  A photo will be provided next week!
I didn't cast on Faraige as I had some minor moth dramas!  I found evidence of moths in both sets of yarn for Faraige and Epistrophy, so into the freezer went most of the yarn for 72 hours.  There was some for Epistropy that was fine so I started with that, but had to wait for the rest.  Following it's icing, I then put the yarn on the back shelf of my car to heat up, so hopefully I have them.  I also invested in some industrial strength moth traps.  I already have lavender all over the place but obviously that wasn't enough.
Last week I also worked on some candles for Christmas.  It was so easy, I made 5 although I have lots more mugs to go. 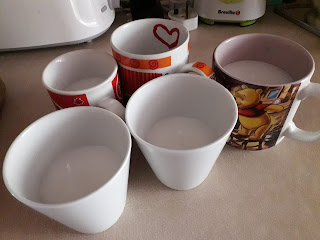 Lastly I will leave you with some cushion covers that I made for Daniel a few weeks ago.  He picked out the fabric and I ran them up for him a bit later.  He loves them! 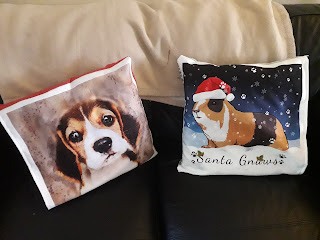