A Year of Projects Update - week 25

And we made it!  Me and the boys made it to the Christmas holiday!  Hopefully ...

We will be taking a test everyday and hopefully, the government will keep us open long enough to go to mum and dad's just after Christmas.

I thought I had been productive this week but then I tried to find what I had been up to and couldn't find anything!

Well that isn't strictly true.  I started my needle felting project and became so enamoured by it I  have ordered some more needles and some wool tops to do some more for a project I have planned over the next few months. 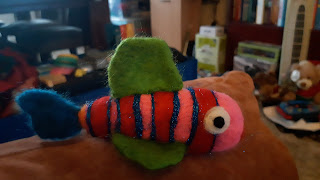 Between that project and thd next I have decided on a Year long project inspired by Sam - a fellow yopper.

Before I elaborate, here is the next project on my needles.

I am using a lucky dip bag from Kate Selene as my advent calendar this year and I wanted to do something with them other than a blanket.  And I decided on some mitts.  I am just following a recipe by Kate Atherley in her knit mitts book.
Whilst I was knitting these up I realised they would make an ideal present and so I have decided to make my mum an advent calendar for next year.   Iam going to do mitts and various needle felted items to start with.
And that is that- I have two more projects I would like to start very soon so watch this space.  I should be able to reveal next week.  So until then have  great week and great Christmas if you celebrate.