A Year of Projects Update - week 28

Back to school this week, so slightly less done, but it was a short week of work so can't complain.

WIP's
Most of the things I have worked on this week have been new cast on's (I hang my head... no not really - it will all get done eventually!)
The only thing I have worked on that was pre-Christmas was Chuck.  I am now making my way down the first sleeve.  I am hoping to get this done very soon and be able to wear this sweater to Unravel.  I was asked last week what Unravel was - it is a small yarn event near where I live.  It is the closest one to me and in reality the only one I can get to. 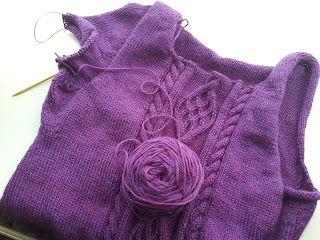 I also cast on and cast off a second pair of Tchaikovsky mitts.  These are exactly the same but a bit bigger than the ones I knit for my gran.  Reason being I mistakenly knit the child size the first time but thought since they fit me ok that they would fit gran as I was sure she had smaller hands.  What I didn't factor in was the fact she has arthritis and her knuckles are quite swollen.  So I didn't say anything at the time as she loved them and kept saying she loved the colour even though I was sure she would have to force them on.  So I have knit her a bigger pair and will send them to mum next week to give to her. 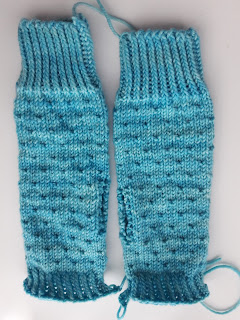 I have been making great progress on Penguono - It is brilliant and I can't get enough of it. 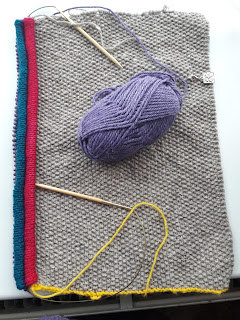 Finally, but with no picture, I cast on some little socks that I am knitting as a garland for next Christmas.  I want 24 to hold next years advent calendar!
I also received some fabric that I got in the sales and cut it out for a coco dress.  I might be able to get to sew that up next week so may be able to show it then.
That is it for this week hope everybody has a great week.